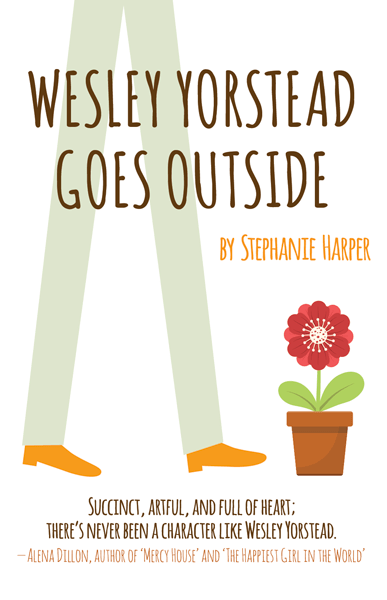 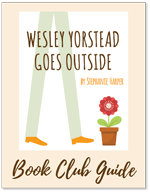 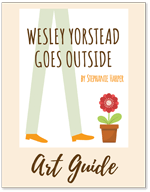 When an agoraphobic man develops a relationship with a vivacious grocery delivery woman, the order he prescribes to his apartment, and his world, begins to crumble around him. Wesley Yorstead Goes Outside explores the life of Wesley Yorstead, a thirty-three year old graphic novelist who suffers from a severe case of agoraphobia that has kept him shut inside for over five years. When he meets Happy Lafferty for the first time, delivering groceries on behalf of her father’s neighborhood market, Wesley can’t shake the inherent magnetism between them and seeks to get to know this young woman who invades his space—both physical and mental. As their relationship grows more intimate, the restrictions of his situation become an even greater obstacle. When Happy’s past comes back to haunt her, Wesley must decide if he can finally leave his apartment to help. A meditation on anxiety, fear, and human connection, Wesley Yorstead Goes Outside asks the reader to consider what our fears take away from our lives, and how we might overcome them.

Praise for Wesley Yorstead Goes Outside

“Stephanie Harper’s debut novel is that rare thing — a true original. Part love story, part adventure, part meditation on the intersection of mental illness and art, WESLEY YORSTEAD GOES OUTSIDE is the deeply moving, darkly comic story of a lonely young man who hasn’t left his apartment in five years. When Wesley ultimately decides that there is just one thing on earth more important than his safety, we all rush through the opening door.”

— Jacquelyn Mitchard, author of The Deep End of the Ocean and My Only

“Succinct, artful, and full of heart; there’s never been a character like Wesley Yorstead.”

— Alena Dillon, author of Mercy House and The Happiest Girl in the World

“Wesley Yorstead Goes Outside is a gem of a novel in which — to paraphrase its terrifically talented, deeply anxious main character — everything we need is inside. With her whip smart prose, Stephanie Harper has created a sharply comic, deeply resonant story, chock full of the idiosyncratic, treacherous and exquisite aspects of real life. The novel champions the high-wire act that is our attempt to make sense of our place in the world and our relationships to one another.”

— Rachel Basch, author of The Listener

“WESLEY YORSTEAD GOES OUTSIDE is a fascinating portrait of a character whose struggle is made palpable by Harper’s precise, lucid prose. With levity, candor, and a sense of adventure, Harper’s compelling debut explores a young man’s relationship to his fears, and his ability to overcome them.”

— Emily Adrian, Author of Everything Here Is Under Control

“Stephanie Harper has written a daring novel – energetic and full of suspense – about a man who can’t walk out his own front door. Wesley Yorstead has spent years inside his small apartment, but nothing about this novel feels confined. It is a triumph of deeply-nuanced character, a vital reminder of the power of art, and a moving exploration of the ways people surpass their own limitations: through courage, connection, and love.”

— Nalini Jones, author of What You Call Winter

Scroll to top
Stay in the know!

Enter your info and I’ll let you know when my new book is released!

Enter your info to receive updates about my writing, news and events, and more!

This site uses cookies. By continuing to browse the site, you are agreeing to our use of cookies.

We may request cookies to be set on your device. We use cookies to let us know when you visit our websites, how you interact with us, to enrich your user experience, and to customize your relationship with our website.

Click on the different category headings to find out more. You can also change some of your preferences. Note that blocking some types of cookies may impact your experience on our websites and the services we are able to offer.

These cookies are strictly necessary to provide you with services available through our website and to use some of its features.

Because these cookies are strictly necessary to deliver the website, refusing them will have an impact on how our site functions. You always can block or delete cookies by changing your browser settings and force blocking all cookies on this website. But this will always prompt you to accept/refuse cookies when revisiting our site.

We fully respect if you want to refuse cookies but to avoid asking you again and again kindly allow us to store a cookie for that. You are free to opt-out any time or opt-in for other cookies to get a better experience. If you refuse cookies we will remove all set cookies in our domain.

We provide you with a list of stored cookies on your computer in our domain so you can check what we stored. Due to security reasons, we are not able to show or modify cookies from other domains. You can check these in your browser security settings.

These cookies collect information that is used either in aggregate form to help us understand how our website is being used or how effective our marketing campaigns are or to help us customize our website and application for you to enhance your experience.

If you do not want that we track your visit to our site you can disable tracking in your browser here:

We also use different external services like Google Webfonts, Google Maps, and external Video providers. Since these providers may collect personal data like your IP address we allow you to block them here. Please be aware that this might heavily reduce the functionality and appearance of our site. Changes will take effect once you reload the page.

Enter your info below and I’ll let you know when my new book is released!